The ocean is a dangerous place and animals have to continuously adapt to survive. Sharks have been around for over 400 million years and have had a lot of time to adapt to their environments and lifestyles. Some of these adaptations have rendered sharks downright bizarre. This is a list of some of the weirdest sharks in the world and their most interesting adaptations.

Megamouth sharks are one of three filter-feeding sharks, meaning they only eat plankton. Despite their large bathtub sized mouths that can swallow a whole person, they’re very docile and extremely rare. Their lower jaw protrudes and their mouths suck in everything while their gills act as a filter to expel the water inhaled. The maximum size recorded of a megamouth caught and released off the coast of California was 7.62m ! 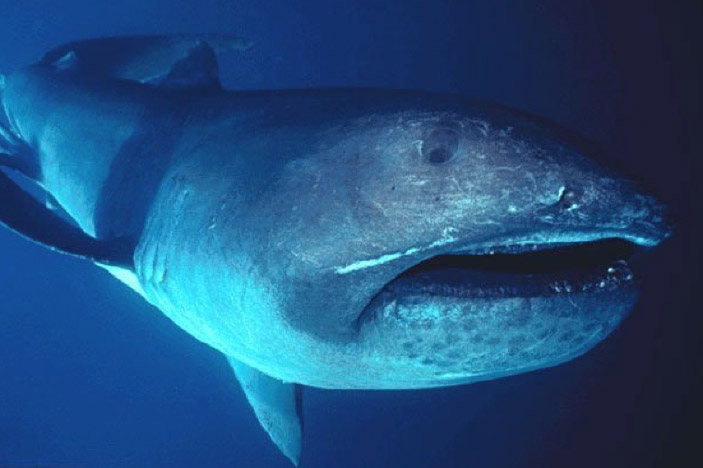 Goblin sharks are sometimes called the “living fossil” since they are the only surviving members of their family, mitsukurina, and it dates back to 125 million years ago. They are one of the strangest looking sharks and vary in colour from pink-grey to bubble gum pink. Some goblin sharks are translucent to a point where their capillaries can be seen. When their prey is just out of reach, their jaw can quickly protrude and extend to the end of their snout allowing them to catch their prey. Goblin sharks can open their mouth to 111 degree angle. 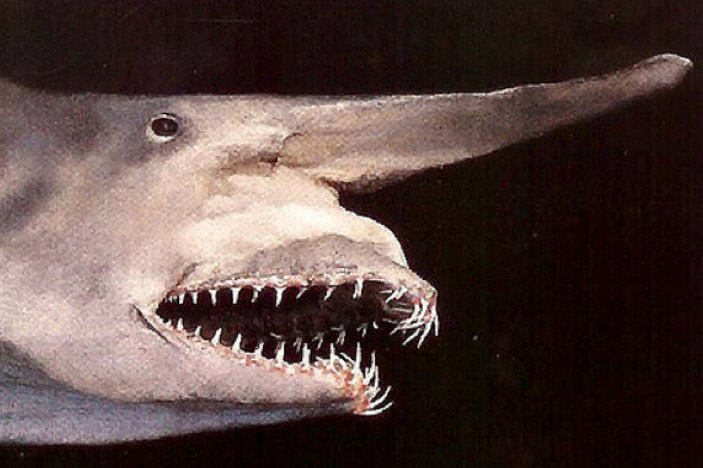 Basking sharks are the second largest fish in the world. Adults can grow between 6 – 8 m long, and their mouths can open to 1 metre wide. They have tiny hooked teeth and gill rakers that they use when they filter feed. Like the megamouth shark, these giants only eat small things like plankton and small invertebrates. Because of this they don’t have to hunt for prey. Instead, when they feed, they swim with their mouth open to catch anything in its way. Their gills will then filter out the water that was taken in. 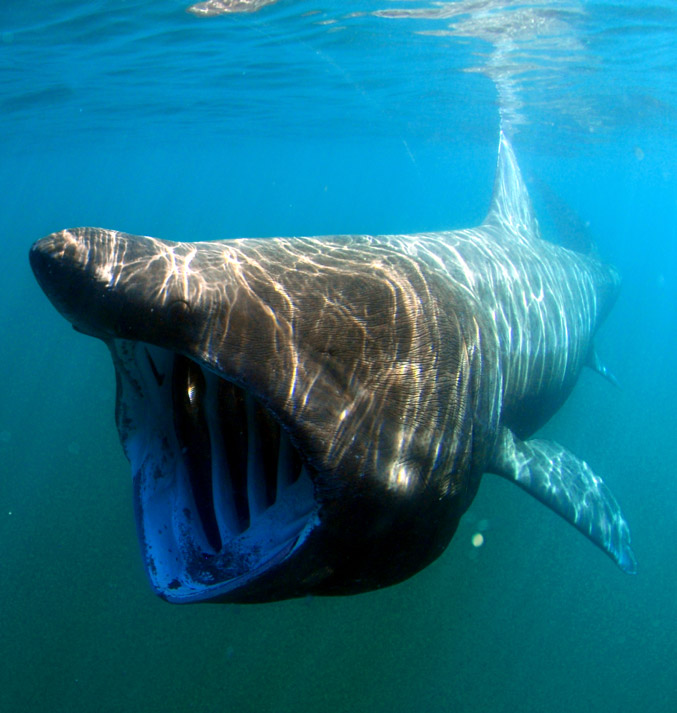 Viper dogfish are rare deep-sea creatures that have photophores which allow them to glow on their underside. You read that right. These sharks belong to the lanternshark family and create their own light to see in the pitch-dark waters of the deep ocean. Their teeth are like needles and their extendible jaw allows them to snatch and consume prey half their size.

Whale sharks are one of the largest fish in the world. They can grow up to 12 m in length, meaning they’re as long as bus. Their mouths can open 1.5 m wide and have rows of over 300 teeth, which they only use to catch plankton. Despite their size, they are gentle creatures and don’t eat anything larger than a few millimetres long. To catch their food, whale sharks open their mouths and move it side to side as they swim. Plankton gets suck into into their mouths filtered by their gills. Their colouring is also extremely unusual for sharks. Fun fact: the pattern on their back vary and are similar to human fingerprints where each whale shark has their own unique pattern! 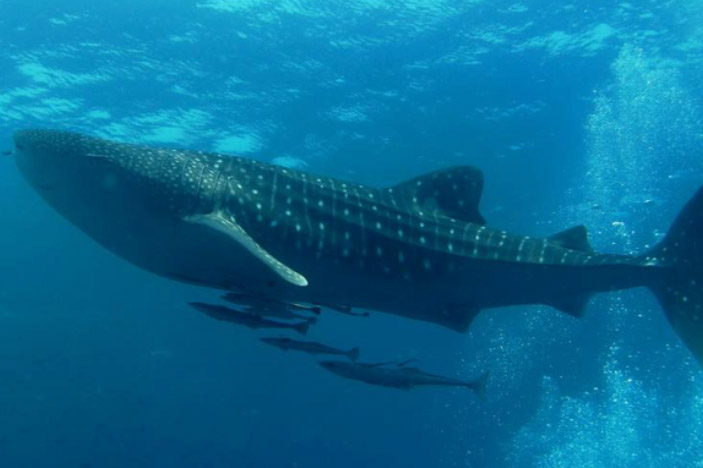 Greenland sharks are deep-sea creatures and endemic to the Arctic and North Atlantic. Their flesh has high levels of urea and TMAO that produces a natural antifreeze which allows them to live in cold waters between -1 to 10  degrees Celsius. Because of this, their flesh is poisonous. They’re consumed in Iceland but the meat has to be processed for months before it’s edible. Scientists have concluded that they are the longest-living vertebrate as seen from the sharks studied whose age ranged between 272 – 512 years. They reach sexual maturity at well over 100 years of age! 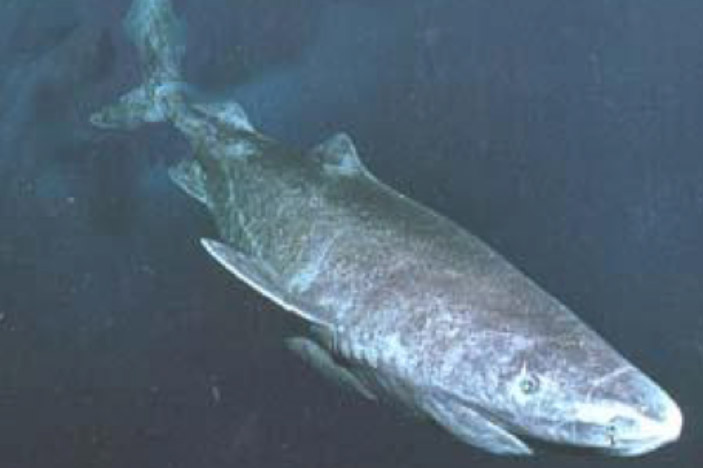 Largetooth Sawfish is one of the largest fish in the planet. It can grow over 6.5 m in length. But the most interesting about them is their saw-like rostrum, which has a number of functions. It has electrosensitive pores that allow sawfish to detect movement of their prey on the seafloor. Their “saw” can also be used as a tool for digging to look for crustaceans. It’s also used to stun their prey by thrashing their “saw” from side-to-side and it can be used to protect them from predators. 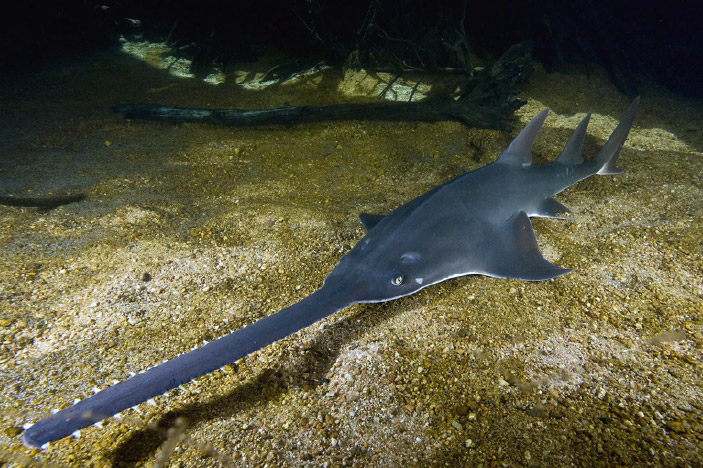 Frilled sharks are extremely rare serpent-like deep-sea sharks. They can live at 1500 m below the surface and can grow to over 2 m long. Their mouth is lined with 25 rows of backward-facing, trident-shaped teeth. Ant any given time, a frilled shark can have over 300 teeth! Frilled sharks can swallow prey half their size. Their name comes from the frilled lining of their gills, which go all the way across its throat. Fun fact: females gestate for about three and a half years. 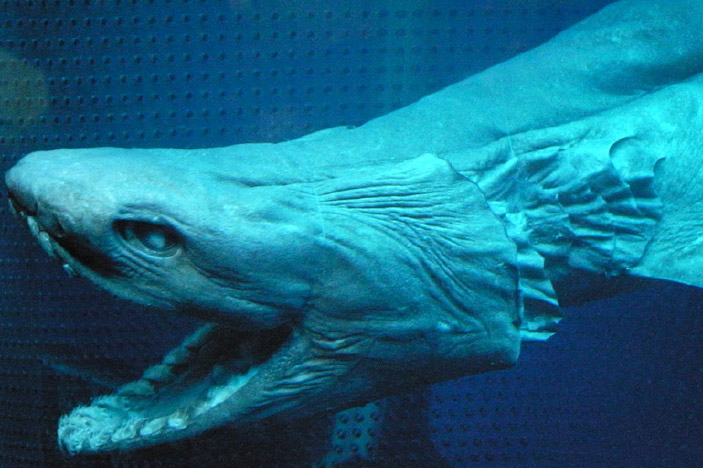 Cookiecutter sharks are named after the shape of the bite marks it leaves on its prey. Relative to body size, cookie cutters have the largest teeth of all sharks! When their teeth are shed, they are swallowed and digested to help strengthen their skeleton. Their skin is pretty weird too. Their entire lower body, aside from their throat, is bioluminescent which allows them to glow and possibly attract prey. 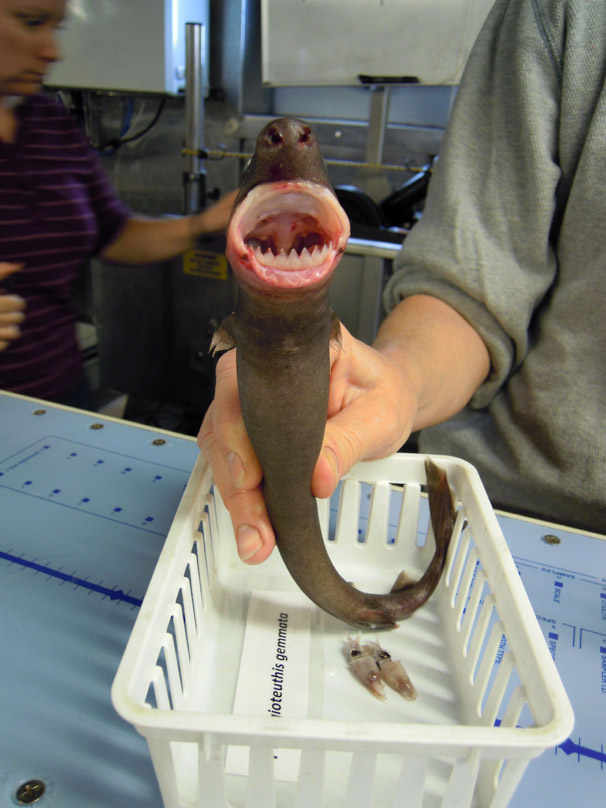 The Ornate Wobbegong has evolved to look like a patch of corals. It’s unusual body coloration helps it camouflage while it waits for prey. This is important because they’re ambush predators, meaning they stay in one spot and wait for prey to come to them. The appendages around their mouth helps in luring prey. Once their prey is close enough, quickly snatch it with their powerful jaws. Larger prey items can be held in a wobbegong’s mouth for days until they die. 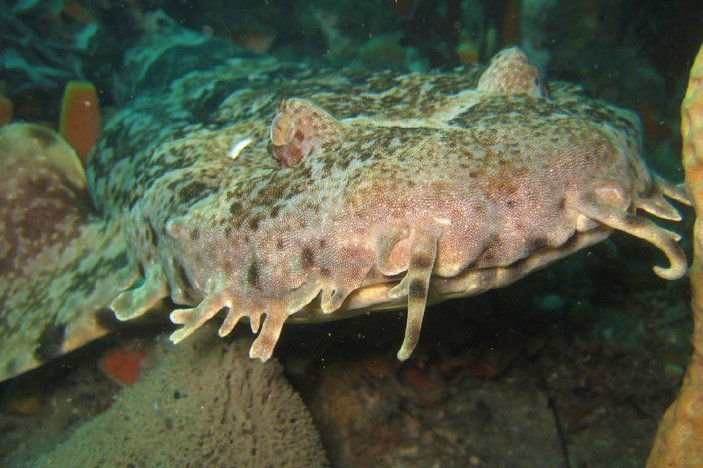 The name Megalodon means “big tooth” which is fitting for this species since it’s the largest shark to ever live. Little is known about their biology, but we can tell based on the fossil record that they could grow to 21 m long, about four times bigger than a great white, and consumed about a tonne of food everyday! 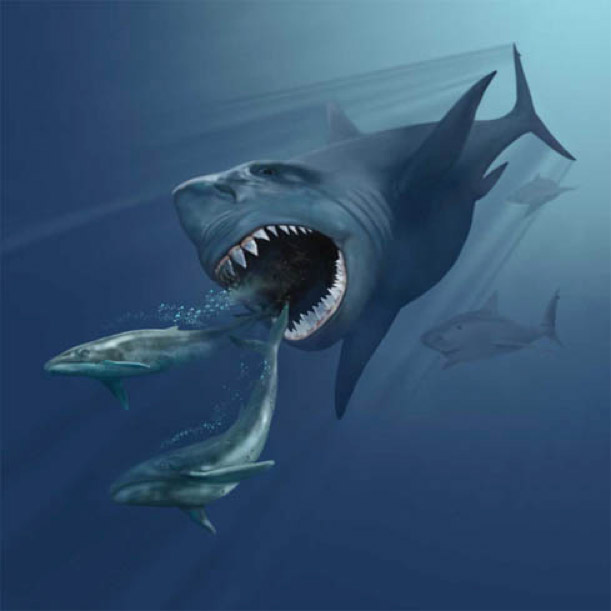 The name Helicoprion means “spiral saw.” Almost all fossils found from whorl sharks were of spirally arranged clusters of the whorl shark’s teeth, therefore, scientists made educated guesses of the anatomy of this species. It’s guessed to vary in size depending on the species, so whorl sharks could grow between 3 to 7.5 m long.

The ironing board shark is named justly as it had a dorsal fin shaped like an anvil. It’s estimated to have been approximately 70 cm long. This species had spikes on top of its head and on his anvil-shaped fin. It’s still unknown exactly the benefits of these spikes were for. 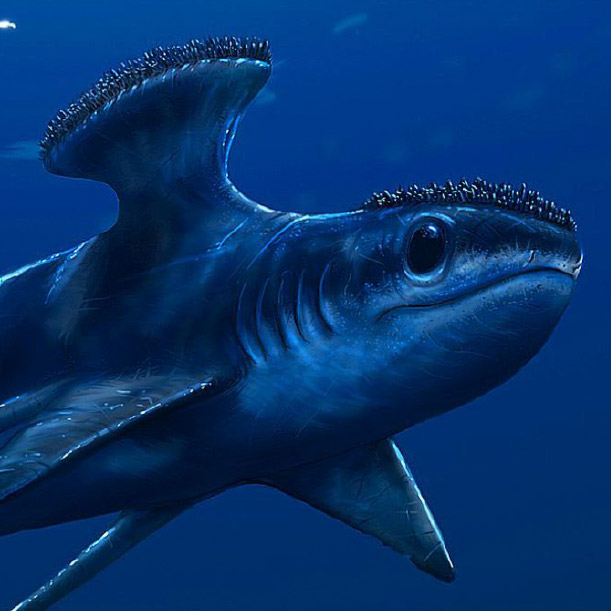 Scissor-tooth sharks had teeth that grew in curved brackets which didn’t shed as they became worn. Unlike many sharks, scissor-tooth sharks had only a single row of teeth for its upper jaw and its lower jaw. Because of their sharp serrated teeth and their large size, larger than a great white, scientists believe they were a top predator. 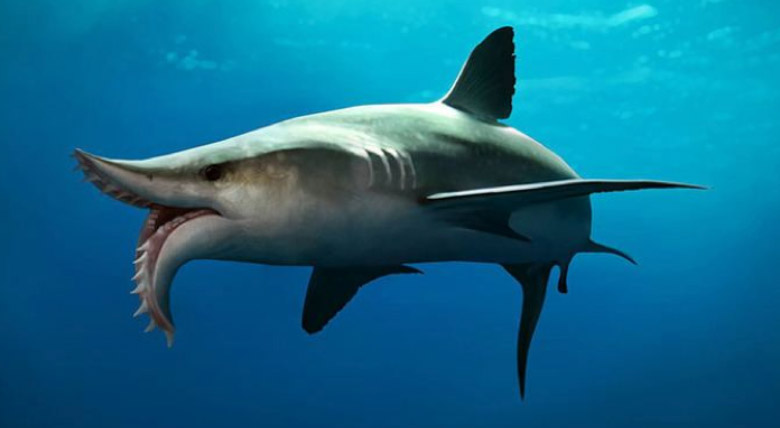 The bandringa was a shark that lived over 300 million years ago and grew over 3 meters long. Its most unusual feature was its long shaped snout, somewhat similar to sawsharks. Like many all sharks, bandringas were carnivores and are presumed to have used their snout to dig for food.